What reality TV won’t tell you about flipping houses 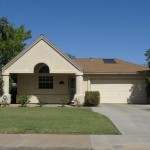 The Gilbert-based flipper, who does most of his work these days in Milwaukee due to the narrow profit margins he found in the Valley, has perhaps a better understanding than most people of what goes into these shows.

“It’s difficult for me to sit through any reality show, because I know so much about the formula,” said Boardman, a former television-news cameraman, referring to the shows’ need for a protagonist, an antagonist and an artificial deadline to stir up plenty of drama.

Although he doesn’t want to ruin anyone’s enjoyment of these shows — they have their appeal, he admits — the author of “Fixing and Flipping Real Estate: Strategies for the Post-Boom Era” ($19.99, Apress, 2012) is always happy to point out things he thinks the shows get wrong about the business. His top bugaboos include:

• Showing just the “sexy” stuff. Most viewers probably realize there are lots of behind-the-scenes footage that will never air, and Boardman knows all too well that it’s the pretty rooms and tension that make viewers tune in each week. But the failure to show any of the more mundane parts of the industry rubs him the wrong way.

“They show all the sexy parts,” he said, “and I’d say 30 to 40 percent of my week is spent in front of a computer screen and, alternately, paying bills.”

Indeed, if a camera crew did show up to film him, they’d probably find Boardman using QuickBooks financial software to track expenses or building Excel spreadsheets to chart schedules on all his properties. After all, there are more than just rehab costs to account for, he added.

“You have holding costs, which include property taxes, insurance and utilities, and there are also selling costs, which include Realtor commissions and title and escrow fees,” he said, noting he has paid as much as 3 percent of a homebuyer’s cost to get a deal closed. So a home he sells for $200,000 and cost him $40,000 to rehab can easily end up costing Boardman $60,000 total.

• Inflated profit projections. The part of some shows where flippers talk about what they think they’re going to sell their rehabbed house for is laughable, Boardman said.

“Nobody projects a loss, and you really have no idea until that house goes on the MLS (Multiple Listing Service) — and you have people come to look at it — what the true market is,” he said.

The market is notoriously hard to predict, he said, adding there have been times he was sure he wouldn’t get the asking price for one of his projects, then offers came in above that price. And then there are other occasions, when “you think you have a slam dunk and there are no offers and no one comes to look at it.” He has seen the “wrong” cabinetry turn buyers away, while the “right” location — three doors down from a client’s grown daughter, in one case — may prompt another buyer to pay thousands over a home’s appraisal price.

• Artificial drama. On many shows, Boardman said, flippers argue with contractors as a deadline approaches and tension mounts, seemingly putting the project in jeopardy. It makes for riveting entertainment, but Boardman said viewers need to remember much of this is just for show. Deadlines, he said, aren’t usually that unyielding.

“Let’s face it, we flippers aren’t brain surgeons,” he said. “If I go three to four days past the scheduled deadline I’ve created for myself, no one’s going to die. If there’s a problem, we want to fix the problem correctly, and everyone yelling and screaming at each other is an incredibly inefficient way to run a business.”

Boardman said he has been approached about doing a reality show, but believes he wouldn’t make a good subject because he’s a pro who doesn’t engage in screaming matches.

“It’s like running any other successful business. You maintain good lines of communication with your maintenance crew and your administrative people and try to stay as even-keel as possible, because there are a lot of highs and lows in this business.”

• Glossing over negotiations. Due probably in large part to the proliferation of these shows, he said today’s homebuyers are well educated about the real-estate industry and more demanding than ever during negotiations. They expect everything to be newer, or brand-new, even in a flipped home.

“If it’s not, they’ll call us on it,” said Boardman, adding that now even the least expensive projects get brand-new materials — travertine, upgraded cabinetry — whether they’re needed or not. But expectations can reach even more absurd levels, like when a would-be homebuyer sees a few cracked roof tiles and proceeds to question a home’s structural integrity.

“We’re not a custom builder, and we’re not in the remodeling business — we’re flippers,” Boardman said. “The finicky homebuyer can cause any rehabber to lose sleep and get gray hair, and they never show that on the reality shows.”