By 2040, Phoenix projects that areas along the city’s light-rail line will have fewer autos, more trees to shade a pedestrian/bike lifestyle and business and residential developments that support that lifestyle.

Reinvent PHX is a proposed long-term plan that seeks to transform five of six districts in Phoenix that straddle light rail. The 20-mile rail route snakes through the neighborhoods of Gateway, Eastlake-Garfield, Midtown, Uptown and Solano.

“Transforming the light-rail (corridor) as a walkable area will take time,” said Curt Upton, the Phoenix Planning Development Department’s long-range planning project manager. “For now, (it) is designed for cars.”

City officials say they expect to seek the City Council’s approval of the plan by December. The city’s urban villages are scheduled to view the plan in the fall.

Reinvent PHX is a partnership among Phoenix, the U.S. Department of Housing and Urban Development, Arizona State University, St. Luke’s Health Initiatives and others. The group proposes to develop walkable communities connected to light rail, according to the partnership’s website.

Upton said Phoenix is providing a road map and the private sector would drive the concept.

The project would create “a new, transit-oriented model for urban planning and development along the city’s light-rail system,” according to the website (phoenix.gov/pdd/reinventphx.html), which has draft plans for two neighborhoods.

The Gateway District, for example, would have upgraded housing, a grocery store and family-owned businesses creating jobs. Existing vacant land would be developed and empty buildings would be rehabilitated and filled with residents and businesses.

Desert landscaping would complement parks and the nearby Grand Canal. The district’s public spaces would be landscaped with trees and low-water-use plants that provided shade.

People would live close to where they worked and be able to meet most of their daily needs without a car.

Reinvention would be costly

Reinvent PHX’s cost is “likely to be in the billions,” city officials said. The majority of the developments would come from the private sector in the form of real-estate, business and non-profit investments, Upton said.

The projects are designed to spark private investment while meeting such community goals as lowering the cost of living, he said. Upgrades would include sidewalks, trees, bicycle lanes, parks, urban plazas and water/sewer improvements. The work would involve investments by government agencies, businesses and foundations and would span several decades, Upton said.

So ambitious an undertaking has serious barriers to overcome.

City officials said zoning regulations need to be modified to attract urban development. The city’s zoning is designed for development in the suburbs, with single-family housing, strip malls and large shopping centers with huge parking lots.

“That is one fit that fits all,” said Upton, adding that existing regulations don’t encourage the construction of buildings with living space on top and shops on the bottom.

The concept also needs a new walkable urban code, which Upton said will be before the City Council by December.

City officials said the vision is based on growing national trends. It is influenced by a survey by the Urban Land Institute titled “Where Americans Want To Live.”

The research polled Baby Boomers and young people. The responses indicated the two groups desire a simple lifestyle in urban areas instead of big houses in the suburbs. The survey also suggested that demand will continue to rise for infill residential development that is less auto-dependent.

Reinvent PHX has received about $5.6 million in funding. Nearly half came from HUD, with the remainder from “in kind” staff time from the city and its partners and from real-estate developers’ pre-development costs. So far, about two-thirds of the funds have been spent.

The funds paid for such expenses as research and data analysis, policy development and writing, code analysis and code development, urban design, traffic and parking analysis to help for design/engineering, legal and environmental costs for a transit-oriented development projects. The funds also finance community forums and workshops. 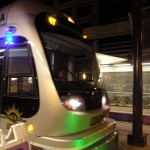 Two community design workshops occurred at the Phoenix Financial Center in March and April and involved conversations among residents and business and property owners. Many participants liked the walkable lifestyle concept, Upton said, while some raised concerns.

Some participants feared demolition of historic properties, while others said an excessive use of windows on multistory buildings might allow people to peer into neighbors’ backyards.

Tamara Klein, 58, attended the April 4 design workshop. She said Reinvent PHX is a “lovely plan” but she has questions.

“I would like to see a beautiful, lush, green city,” Klein said. “That would go so far, but to handle that in the Sonoran Desert, that is a pretty tall order. I wonder how viable putting in all the trees will be.”

Not everyone will embrace the plan because people are used to the single-family lifestyle, she said, and an auto-oriented society will be hard to change.

Klein also is worried that the concept overlooks elders.

“I don’t see elders biking around in the city, especially in the summer. I don’t care how many trees you have,” she said.