Much has been made of the future of Main Street between Mesa Drive and Gilbert Road — the light-rail extension that could boost Mesa’s ridership by 4,000 people a day if constructed. 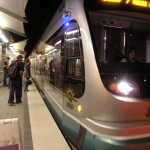 The 1.9-mile swath is peppered with old gas stations and auto shops, which means several of the properties Mesa would own or partially own along the route have been contaminated by petroleum or other pollutants.

Given the extension’s potential for revitalization and job creation, the federal Environmental Protection Agency has decided to give Mesa a hand with the necessary cleanup, to the tune of $400,000.

An EPA spokesperson said the agency funded 15 of 31 applications in its Pacific Southwest region and judged recipients based on project feasibility, need, potential benefits to the area, and applicants’ community engagement and partnerships.

Mesa Environmental & Sustainability Deputy Director Steve Bouchie stressed that such grants cover the preliminary spadework required to initiate cleanups, not the cleanups themselves. The city has firsthand experience, having received a comparable pair of $200,000 grants in 2011 for the 3.1-mile extension now under construction along Main Street between Sycamore and Mesa Drive.

“Really, the first portion of doing these inquiries is doing some intensive records review, where you’re looking at aerial photographs going back 100-plus years, database searches, information both from fire departments and the (Arizona) Department of Environmental Quality, as well as Maricopa County,” Bouchie said.

The city’s Environmental & Sustainability Division will work with engineers and real-estate experts to identify relevant properties and what needs to be done, while a consultant will handle the records review and any sampling at the sites, he said.

Though the EPA announced the award in late May, Bouchie said he doesn’t expect to have the funding on hand until fall.

Work will begin after that, assuming Mesa has access to all the necessary sites, and likely take about a year.

“(The) next step is looking at how we can get development in the area. Particularly around the transit stations that we’ll have,” Bouchie said. “We’ll be looking at this as a catalyst.”