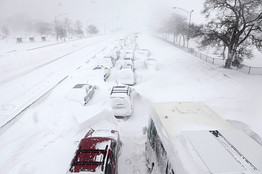 Associated PressHundreds of cars are were stranded on Lake Shore Drive earlier this week in Chicago.

Will this drive boomers to live somewhere cheaper? It might. And that may also be a case for looking south.

According to the Accra Cost of Living Index, places like Phoenix, Arizona, Las Vegas and Austin, Texas—and Fort Myers—cost less than half as much to live in as Manhattan, and far less, too, than places like Chicago.

House prices, as everyone knows, have collapsed across the sunshine states. While the rest of the country has also been hit, the declines have in most cases been more muted.

How do the two compare? Using house price data from Zillow.com, I looked at typical real-estate prices in one of the boom-and-bust towns down here—Fort Myers, Fla.—and those in a typical northern city—in this case, Chicago.

Bottom line? At the height of the mania, according to Zillow, typical real-estate prices in Fort Myers briefly reached parity with those in Chicago. Today? They’re down to about 60%. The ratio in the late 1990s, before the boom: also about 60%.

By this measure, at least, we’re back where we started. It’s like the bubble never happened.

In practical terms, the price gap today may be even wider than it appears. That’s because there now are so many foreclosures down here—and in the other former bubble states—that an aggressive shopper can find ridiculous bargains. Even in Miami Beach, where we own a place, I see prices have been coming down again over the past nine months or so. A lot of the European buyers vanished after the Greek crisis. And many distressed homeowners, after keeping one step ahead of the bank for a couple of years, have finally run out of options.

None of this is going to give a real boost to the property market in the short term. There are so many distressed homeowners around that prices could stay depressed for quite a while. They could fall further. And anyone looking to buy needs to do their homework carefully.

Yet in the depths of a crash, it is always tempting to assume that the preceding bubble was totally ridiculous. They often aren’t. Consider the bubble before real estate: that in tech stocks. By 2002-03, everything about it looked absolutely absurd. (I remember having dinner at the time with a former venture capitalist who confidently assured me that “Amazon.com is going to end up as a division of Barnes & Noble.”)

But here we are. Today, just as those “crazy” investors predicted in 1999, we really are using small handheld computers with mobile Internet connections to surf the web, bank, read the news, watch TV and video-chat with friends on the other side of the world. Stocks of a few big winners, such as Apple and Amazon, have actually far surpassed their bubble-era peaks.

We are hard-wired to extrapolate from the present, from booms to busts.

Will real estate in the sunshine states recover? Will the great baby-boom migration south actually take place? I think it might.

OK, maybe I’m just being a contrarian. But hey, at least I’m a warm contrarian!

Write to Brett Arends at brett.arends@wsj.com